The 1-Stage is a stage format found at older Chuck E. Cheese's locations. These stages are configured as Munch's Make Believe Band.

The original concept for the stage was introduced in specific versions of the 2-Stage, to which there was no Fiber Optic sign nor TV screen to separate Chuck E. Cheese and the other band members. In May 1993, the first version of this stage, the decor, and the characters' outfits had different changes from the final version. These new changes included renaming the band to "Munch's Party Time Band" and giving Helen yellow hair (a staple she would soon take with this early version) and a roller skate costume, Munch, a tie, as well as retiring his hat, Jasper, a more punk rock look, and giving Pasqually a baseball outfit. This version was only in Department 18 and at the Irving TX location.

The first public 1-Stage was introduced in 1992 at Waldorf, Maryland with the finalized version installed in 1994 at Irving, Texas. It is a traditional CEC Stage that, as its name suggests, is a compact show that is restricted to the size of only one stage, as well as having simple bots to which were named "Cyberamics" in the early 1980s. The animatronic arrangement here is not unlike the other CEC Stages; Chuck E., Helen, Munch, Jasper, and Pasqually lined up from left to right in that order. The stage is unlike the usual Cyberamic MMBB stage, as it has a specific backdrop that implements two brick walls with either a fiberoptic sign or an MMBB logo sign (behind Chuck E. and Pasqually), as well as a more colorful version of the original rooftop buildings, seen initially on previous MMBB-styled stages. Originally, the stage had 2-Stage backdrops and was smaller before the finalized design was released in 1994. The show's size takes up very little of the Showroom floor, creating a simple and yet effective form of animatronic entertainment. An interesting thing to note with this stage is that some, but not all, 1-Stages have a unique feature, a turntable beneath the Chuck E. Cheese animatronic that rotates when the walkaround Chuck E. Cheese comes out for live shows or to mingle with the young guests. The feature was meant to avoid the confusion of seeing two Chuck E.'s, one on stage and one on the floor. The turntable, thus, solves this problem by creating the illusion that the animatronic Chuck E. Cheese came off the stage.

Newer stages would soon rearrange around the different props featured in the final version that appeared at Irving. Soon, these brand new stages would take back the original outfits the characters wore earlier in the 1990s and dropping features like the turntable. Irving, after their Phase 4 remodel, would also go through these changes.

The 1-Stage in Columbus, Ohio. 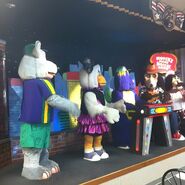 The 1-Stage in Chicago "Fullerton", Illinois in 2013 with the Avenger Uniform

The 1-Stage in Chicago "Fullerton" , Illinois in 2020 (with Skokie's cosmetics, and benches).

The 1-Stage in Toledo, Ohio (Monroe).

The 1 Stage in East Hanover, NJ. 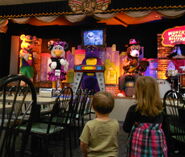 The 1-Stage in Pico Rivera, California.

The 1-Stage in Levittown, Pennsylvania with sign removed and Chuck E. Cheese in his Avenger uniform. (Now closed).

The 1-Stage in North Dartmouth, Massachusetts (2021)
Community content is available under CC-BY-SA unless otherwise noted.
Advertisement