The 2-Stage is a stage format found at Chuck E. Cheese's locations. Most of these locations originated as Pizza Time Theatre locations. These stages are configured as Munch's Make Believe Band.

The 2-Stage was introduced in March 1992 with the first installation in White Settlement, Texas. Some 2-Stages were created from Balcony and C-Stages, mainly involving putting the animatronics on new leg assemblies, installing new arm assemblies on Munch and Pasqually, and redressing the animatronics to resemble their 3-Stage counterparts.[1]

The 2-Stage is very similar to the 1-Stage; the only real difference being that, rather than all five band members sharing one stage, Chuck E. is off to the right side on his own stage, with his own curtains and lighting. On the main stage, where Chuck E. usually stands, there is a large-screen rear projection TV that plays the current showtape; above the TV is a color-changing Fiber Optic display that reads "Chuck E. Cheese." The remaining characters, Helen, Munch, Jasper, and Pasqually, are on stage left. The Wink is above both stages.

Throughout the 1990s up to the 2010s, some 2-Stages have been converted to 1-Stages with their original props remaining. These conversions are unofficially known as 1/2 Stages. 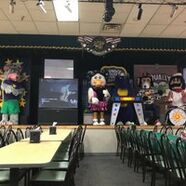 The 2-Stage in Huntington Beach, California (2022)
Community content is available under CC-BY-SA unless otherwise noted.
Advertisement