ShowBiz Pizza Wiki
Register
Don't have an account?
Sign In
Advertisement
in: Articles in need of cleanup, Article stubs, Stages,
and 5 more

The Balcony Stage was the second stage created for Pizza Time Theatre.

The Balcony Stage debuted in 1980 at the San Jose, California location on Kooser Road and debuted with Foxy Colleen as the guest star. It featured all five characters in half bodied form. From left to right, the characters were: The Warblettes, Munch, Jasper with his banjo, Chuck E. Cheese, the Guest Star, and Pasqually with his squeeze box. Underneath Munch and Pasqually were entrances to the tunnel and strobe light world of "Mr. Munch's Madhouse". However, many locations had begun to block the entrances in the late 80's due to the poor conditions inside.

The Clapper Board and Band Board also sat on the walls beside Pasqually.

In 1984, all locations installed Helen Henny on the stage after she became a permanent character.

In 1988, most Balcony Stages were phased out in favor of the C and Rocker Stage. The rest were converted into the 2-Stage, 1-Stage, and Road Stage, which mainly consisted of placing the existing animatronics atop a new assembly (mostly legs), as well as giving Munch and Pasqually new arm assemblies and redressing all of the animatronics to resemble their 3-Stage counterparts.[1]

The last known Balcony Stage was in the old Lake Forest, California Chuck E. Cheese's location until Fall 2001 when the location closed down and relocated to Laguna Hills. The stage was rather unique as it still had PTT Helen wearing her 90's outfit, and the bottom area where Mr. Munch's Madhouse was located was completely opened up, giving the stage a resemblance of a house (like a C-Stage).

Although the Balcony Stage is now extinct, a set of animatronics from a Balcony Stage (with the Cyberamic Warblettes, the Broadway-era Helen, Mr. Munch, Madame Oink, and Jasper T. Jowls, plus the Clapper Board) has recently been spotted on display at Marvin's Marvelous Mechanical Museum, located in the city of Detroit, Michigan. 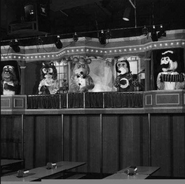