Billy Bob's Wonderland is an FEC restaurant and arcade operating in Barboursville, West Virginia that featured the the Rock-afire Explosion. Their Rock-afire Explosion animatronics were formerly known by many patrons to be in poor condition. Currently (as of Jan 2022), however, they are under going restoration by Braylon Giles. It is currently one of the last public places to host performing Rock-afire Explosion animatronics after many other family entertainment centers either closed or trashed their shows over the span of the mid 2000's to around the mid 2010's.

The Billy Bob's Wonderland franchise dates back to 1989, with its first location being in East Barboursville. It was a former Showbiz Pizza Place location that was rebranded and redecorated to avoid any corporate interference from Showbiz Pizza Time Inc. and the upcoming Concept Unification conversion. There was also a two locations that opened in Ashland, KY, and East Barboursville, WV respectively. No opening date has been confirmed for either of the stores. The current location (where both the East Barboursville and Ashland stores relocated to) opened in 2003 and was much bigger in size than the three previous locations. Both shows from the old locations were brought to the current location, but only one show was put on stage. That would be the Ashland, KY show, “The South Charleston location closed in the late 90's.”- Rex Donahue Jr said.

The restaurant also had an outdoor amusement area with mini-golf and go-karts similar to that of a Celebration Station (an FEC which also had mini-golf, go-karts, and other outdoor activities as well as previously having animatronic shows). This section was called "Billy Bob's Adventure Golf & Go-Karts". It was permanently closed in 2016 and hasn't reopened since then.

At some point, Aaron Fechter attempted to restore the show, but, according to Aaron, Rex was very rude toward him and even threatened him and his wife. Because of this, Aaron hasn't returned to the restaurant since. 2014-2015, the show was (somewhat) restored by David Ferguson of DSF Robots and Goofy Gas Fillin' Station fame. Most of the broken movements were repaired, the TiVo show controller was replaced with David's signature BlueBox, and the cosmetics were also replaced. Though the show did get fixed, most of the parts and cosmetics were aftermarket and did not last very long (this was mainly caused by air pressure being too high, which caused the animatronics' masks to melt and some movements to break).

As of January 2019, the show was in very poor condition. The characters’ masks were melting, Mitzi Mozzarella had a broken arm, Beach Bear wore a walkaround head, and Looney Bird didn’t function at all. The show underwent a mechanical and cosmetical restoration by Braylon Giles and Anthony Ybarra until they were fired in late 2019. Since their firing, the condition/quality of the RAE in the location began going downhill.

In late 2020, the center stage was completely shut down to give Rolfe DeWolfe, Billy Bob, and Looney Bird a larger amount of air pressure.

In late 2021, Braylon Giles came back to Billy Bob's to attempt, and eventually succeed, at fully restoring the show, both mechanically and cosmetically. The masks were again however, unofficial. Billy Bob and Looney Bird were reverted to the normal positions on stage, and Center Stage and Stage Left finally got grass added.

As of February 2022, restoration has been completed, and the show is now operating.

Billy Bob’s Wonderland also has three spare Rock-afire shows in a trailer behind the restaurant, with those animatronics being used for spare parts. 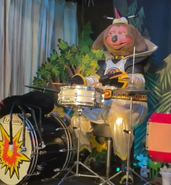 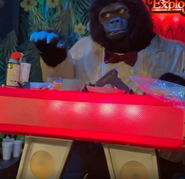