This article is about the Studio C character. For the character on the Uncle Klunk stage, see Murray D. Bird.

. The Bird is a green parrot with red wings who is Chuck E.'s sidekick as shown on the Studio C Alpha and on Studio C Alpha Beta Mix stages. On stage, he resides on a perch, and often announces for Chuck E. and the [[Munch's Make Believe Band|band]

The Bird was originally designed to give Chuck E. someone to talk to on stage for Studio C Alpha. The plan originally was to phase out the other characters. However, this plan was scrapped. Originally, the Bird had a more prominent role on stage, but later disappeared into the background, where he is today. In 1999, during the Fabulous World Adventure, the Bird had a major role in the showtape and was voiced by Earl Fisher. Currently, the Bird does not talk, except for doing backup singing and occasional announcing. He still moves around and flaps his wings to the music, however. In 2015 he was programmed to provide a squawk sound effect during Costume Party. 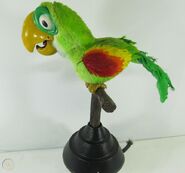 A bird animatronic that was sold 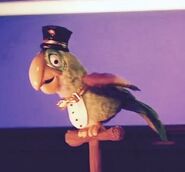 Bird at the 1998 GM Convention
Community content is available under CC-BY-SA unless otherwise noted.
Advertisement