The Circles of Light stage is a single-animatronic stage used at Chuck E. Cheese's. It is currently only offered for franchises. This was the last stage to be created before the Rockstar era.

In early 2012, Weigl became a Vendor Partner with CEC Entertainment Inc., to help with the new stage design.

Circles of Light was introduced to Chuck E. Cheese locations in the Spring of 2012. CEC was planning for the fifth iteration of the main stage attraction when Weigl was asked to engage in the conversation. A major priority was to evolve the technology to allow for more advanced programming and control.

Dubbed Circles of Light, the new stage show includes many new elements designed to further engage the guests and highlight the Chuck character. Features include; a large HD screen on the wall, enhanced theater-quality lighting, and touch-sensitive LED-backlit wall panels. The new stage is fabricated by Corman and Associates, and continues to use the famous Chuck character produced by the California-based animatronic’s studio, Garner Holt Productions.

Garner Holt Productions has built the animatronics since 1998 when the Studio C stage was introduced.

In September 2012, the test stage in Dallas Montfort removed their animatronic. This would not affect Circles of Light installations afterwards until December 2013 when the second animatronic-less store opened their doors in Long Beach, CA (Now closed). From there on every Circles of Light stage would be installed with no animatronic with the exception of franchises like Tucson, AZ, Chandler, AZ and Kapolei, HI.

There is a technical easter egg hidden in the Circles of Light stage. During any video segment other than the Chuck E. Live segments or the musical acts, there are three circles that are always changing color while the others remain a single color. Pressing the color changing circle in the center under the screen will cause the stage to flash and shimmer. 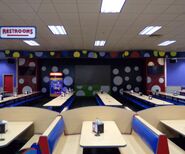 Circles of Light without an animatronic. Live - Thats What Makes You Beautiful
Community content is available under CC-BY-SA unless otherwise noted.
Advertisement