The Concept Unification Prototype stage is a stage format that was tested as a method of replacing The Rock-afire Explosion at 3-Stage locations with the Pizza Time Players, using a house theme for the stages. This stage was never installed in a ShowBiz Pizza Place restaurant, and only installed in Department 18.[1]

Designed by Jul Kamen, the Concept Unification Prototype stage consolidated the three stages of The Rock-afire Explosion into two stages, consolidating center stage and stage right into a single stage. The stage was designed to appear like the interior of a house, which was similar to the "house" theme at existing Chuck E. Cheese stages such as the Rocker Stage and the C-Stage. Pasqually was on Stage Right, while Helen Henny, Chuck E. Cheese, and Jasper were on Stage Left. Mr. Munch was inside a red barrel (originally a trash bin) next to Pasqually. Also, his character in the show was one of the most unique, in that five (confirmed) animatronics would allow him to travel around the two stages. [1] Center Stage also had a flower pot with the Singing Flowers in it.

In this stage design, most of the characters were placed on different animatronic bots than would later be done for Munch's Make Believe Band.[1] 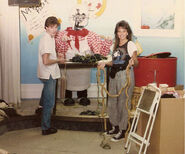