Dolli Dimples is a blues/jazz piano-playing hippo that played in the Cabaret side dining rooms at Chuck E. Cheese's Pizza Time Theatre.

Unlike most of the Chuck E. Cheese characters past and present, she was meant exclusively for adults.

Dolli Dimples would often sweet-talk and dedicate songs to the guests sitting near the other side of her piano. She would also reminisce of her former husbands, often tying them in to monologues of song titles. She also has been known to use innuendo. She was the first animatronic to play the piano, before Artie Antlers and B.B. Bubbles. She has two known showtapes from 1978 and 1982. She also apparently knows Madame Oink as well, as she mentions her in one of her tapes as: "The Piggy from Paree"

Her name appeared in a photo in "Remember That Time"[1] in 2017 Show 1, but was misspelled as "Dolly Dimple". Sally Sashay's name also appears in the same photo. She also made a full cameo appearance as part of the artwork in the video of the 2017 version of Every Boy Every Girl. Dolli then made another cameo in 2018 in the animated short, “Halloween at the Pizza Time Theatre”, alongside Madame Oink and The King. 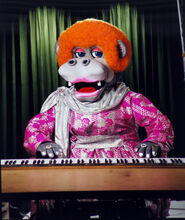