Foxy Colleen (also known as Foxy Flanagan) was an Irish female fox character who was a guest star at Pizza Time Theatre.

Foxy Colleen debuted in October 1978. She was the third guest star to be introduced, following Helen Henny in August 1977 and Madame Oink in February 1978. Like Harmony Howlette, she was voiced by an unknown actress, though she may have been voiced by the same person. She had at least three showtapes: her original "Portrait" tape (which may have been the last showtape to feature Crusty the Cat), "Showboat" in early 1980, and "Irish Stew" in August 1980. She often flirted with Jasper, who was completely infatuated with her, going so far as to dedicate songs to her during shows. Foxy would even invite Jasper to see her backstage after some of her shows, which only drove Jasper even crazier, much to Chuck's annoyance. Unlike guests like Sally Sashay, who would try to snap back at Big C for his insults, Foxy would try to charm him with compliments and win him over.

There has been some confusion regarding Foxy's last name, because her last name was called upon as Colleen or Flanagan throughout the show. However, the name Colleen is just a general term meaning "young girl" in Irish culture, and Foxy's proper last name was indeed Flanagan, which is the name that the others always called her. Furthermore, during a segment of the "Irish Stew" show, Foxy mentions that she was already spoken for by "Kelly of Colleen", possibly hinting that she was already married to Kelly and had adopted his last name, but the others didn't know about this and continued to call her Flanagan instead. 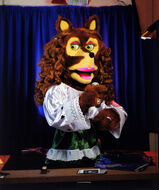