The Frog is a prop character on center stage for The Rock-afire Explosion.

In the early years of the band and ShowBiz Pizza, the Frog was positioned on Beach Bear's surfboard. This was done for a specific reason: early versions of the Frog had eyes that were attached to springs. When Beach Bear rocked back and forth on his surfboard, the Frog's eyes would pop out and bounce around.

Later on, the eyes changed color and became blue (they were red previously) and the Frog was moved to the Center Stage floor and became a decoration.

During Concept Unification, which took place at nearly all of the ShowBiz Pizza locations between 1990 and 1992, the Frog (along with most of the other props on the center and left stages) was removed completely. After these events, the prop was likely either destroyed, put into storage, or sold off to a collector.

It should be noted that on the Concept Unification Prototype Stage, the Frog was also removed. However, according to some artwork for the stage, he was initially intended to be used, still as a decoration. 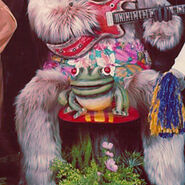 An early version of the Frog with red eyes, seen on Beach Bear's surfboard.