"Keep your friends close and your dogs closer!"

Jasper T. Jowls is the lead guitarist (though he plays bass guitar more often) in Munch's Make Believe Band at Chuck E. Cheese's. The "T" in his name stands for Tennessee. Jasper is named after Jasper, Tennessee .

Jasper originally appeared at the original Pizza Time Theatre location in 1977. His original name was listed as "Billy Banjo Boggs" on PTT's initial copyright sheets, but it was soon changed to Jasper T. Jowls. In the original demo shows, Jasper was voiced by John Widelock, along with the rest of the characters.

When Jasper debuted on the Shelf stage, Jasper played a banjo, Originally Jasper carried a real banjo, however this was quickly dropped as the weight of the banjo was damaging the animatronics. His voice was provided by Scott Paulin, who gave him a very wild, redneck type voice which included a loud laugh, which often prompted Chuck E. Cheese to order the tech backstage to "Turn off the fruitcake dog!" which would cause Jasper to "Fall asleep".

When the Guest Star program began, Jasper would often fall in love with them, particularly Harmony Howlette, much to the annoyance of Chuck E. Cheese. When Helen Henny became the permanent female band member, Jasper's romantic behavior's were phased out. On the Balcony stage, he was placed to the left of Chuck E. Cheese, a place he'd hold until Munch's Make Believe Band was created.

For the Rocker Stage, Jasper was made into a full body animatronic, along with Chuck E. Cheese and Helen Henny. In 1986, Scott Paulin was replaced by Bob West as the voice of Jasper.

When Pizza Time Theatre and Showbiz Pizza merged into one company, Jasper, along with the rest of the band went through a slight redesign. He was now shown in a much more cartoony, younger style as opposed to his older look from PTT. In the late 1980s when Showbiz Pizza created the Concept Unification Prototype to test phasing the Rock Afire Explosion out of Showbiz, Beach Bear was converted to Jasper. This would end up being the only conversion to remain when Concept Unification began. His banjo was officially replaced by an electric guitar, and most of the following stages would replace it with a Cheese shaped guitar.

Throughout the 90s, Jasper had several voice actors as Disney produced their very own shows for the restaurants. These voice actors included; Bob West, Charles Stewart, and Reggie Smith.

During the shows from 1996-1997 which utilized the Awesome Adventure Machine, Jasper went through another slight redesign. He was now an articulated walkaround with moving eyes and mouth,

Jasper appeared in the direct to video film Chuck E. Cheese in the Galaxy 5000. He uses his articulated head from the Awesome Adventure Machine shows, and was voiced by Jeremy Bladio.

In 1998 with the introduction of Studio C, Jasper was no longer manufactured as an animatronic, rather being portrayed as a puppet on screen, along with the other side characters. He was also given a new voice by Jeremy Bladio. Jeremy gave him a much more laid back voice, very similar to Bob West. For two shows in 2011, Jasper was voiced by Rob Gotcher who gave him a completely different voice from before.

In 2014, Jasper was updated to the new "Rockstar" design, ditching the hat and overalls for a new denim look. His fur also became light brown and his ears darker brown, as opposed to black. He is still voiced by Jeremy Bladio to this day. 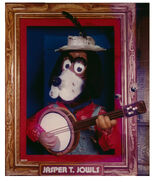 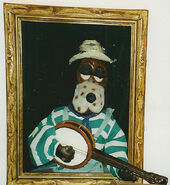