Aaron Fechter (1980-1983), Monique Danielle (1982), Shalisa James (late 1982-present)
Mitzi Mozzarella was the only female member of The Rock-afire Explosion. Over time, she was developed into a character designed to be a important role model for young girls. She was also strongly promoted by ShowBiz Pizza Place, being heavily featured on merchandise that was targeted toward girls.

When the Wolf Pack 5 was created in 1978, the lead female vocalist was Queenie the Fox. When the Wolfpack 5 was placed into the first ShowBiz Pizza Place, Queenie was changed into a mouse named Mini Mozzarella. This was done to go along with the "pizza" theme of the restaurant and to possibly play off a connection with, then competitor, Chuck E. Cheese. Originally, Creative Engineering didn't want to make the change, but ended up agreeing to it. When the Rock-afire Explosion was developed, Mini became Mitzi. With the name change came a change in appearance. Mini's blonde wig and '50s style dress were replaced with a cheerleader's outfit (green and white skirt, white socks, white sweater with a big green M on the front, and a green turtleneck under the sweater), black and white saddle shoes, green and white pom poms, blonde hair, and green hair ribbons; the Memphis, TN location had a Mitzi with a unique outfit just prior to Concept Unification, being dressed in the colors of Memphis State University and having the initials "MSU" on her sweater. It helped her appeal more to young girls. When the New Rock-afire Explosion was created, she was made more life-sized ("mijjin" size) and recieved a whole new outfit. She often wore a shiny black or plaid dress with a matching headband and never had her blonde hair.

A second generation version of Mitzi was created, but was never installed in any ShowBiz Pizza restaurants, due to budget cuts within ShowBiz. The second generation of Mitzi could reach out in front of her with her arms and bend her waist, giving her the ability to dance on stage. The only known footage of this incarnation was a sneak peek from the Colander Head Telethon, a mock-telethon sent out to ShowBiz Pizza Place locations to promote the Colander Head Night promotion.

During Concept Unification, which occurred at most of the ShowBiz Pizza Place restaurants between 1990 and 1992, ShowBiz retained the relevance to kids, especially young girls, in Mitzi's character. This was accomplished by assigning the desired elements of Mitzi's character to Helen Henny, which lives on to this day. Her animatronic was moved to Dook LaRue's former position on center stage.

It should be noted, however, that on the Prototype Concept Unification Stage, Mitzi's animatronic was originally going to be converted into Chuck E. Cheese.

Aaron Fechter, head of Creative Engineering, was Mitzi's original voice. He was Mitzi's voice until 1982, when Monique Danielle briefly took over as Mitzi's voice. In late 1982, Monique was replaced by Shalisa James, who was 11 years old at the time. Her voice work both in the showtapes and on the stage made Mitzi the only character to "age" from year to year. As Mitzi's voice, Shalisa also sang pop songs that kids of the time could relate to, making Mitzi even more popular among kids. Shalisa can still provide Mitzi's voice to this day.

A retrofitted Mitzi Mozzarella animatronic was used for the British restaurant Hannah Banana for their mascot of the same name. Hannah Banana is a monkey girl who is Welsh. 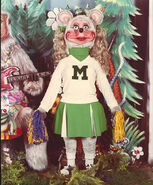 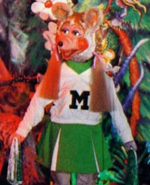