The Moon is a prop character from The Rock-afire Explosion at ShowBiz Pizza. He is located on Center Stage behind Beach Bear and Mitzi Mozzarella. He is also a character of Munch's Make Believe Band at Chuck E. Cheese's, where he also appeared in the background of Center Stage, this time behind Jasper T. Jowls.

Originally, the Moon had a grey latex face. Later on, he was given a blue face.

Like the Sun, he would sing backup and sometimes be an announcer for some shows. In the Abbey Road show, Moon sings a verse of "Golden Slumbers". His voice was provided by Rick Bailey, who was casted as Beach Bear later on.

Personality wise, the Moon was snippy and obsessed with propriety. He also had horrible psychotic tendencies as seen in a few early skits from 1980 - 1983. This personality trait was scrapped in order to make the character more child friendly.

During Concept Unification, which took place at nearly all of the ShowBiz Pizza locations between 1989 and 1992, the Moon remained intact throughout nearly the entire process, only to be removed briefly to install the new background and carpeting. After that was finished, he was returned to his stage-space. He was the only character to do so without being removed entirely or reconfigured into another character. In his new role at Chuck E. Cheese's, he would normally be an announcer for the shows. He would occasionally sing backup, much like Pizzacam or the Building. However, since the mid-1990s, some locations have removed this character.

It should be noted, however, that on the Concept Unification Prototype Stage, the Moon was removed completely in order for a traveling Mr. Munch animatronic. 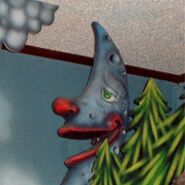 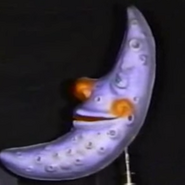