Mr. Munch debuted in 1978 at the second Pizza Time Theatre restaurant. He replaced Crusty the Cat. He was originally voiced by Scott Wilson. On Portrait/Shelf Stage, Mr. Munch was placed behind closed doors, similar to Pasqually. He originally had a scratchy voice, which became a deep voice during Concept Unification, before reverting back to the scratchy voice in 2014. He was originally portrayed as slower witted than the other characters. When the Rocker Stages and C-Stages debuted in 1987 and 1988, Mr. Munch was placed inside of a window, as was done with Pasqually. When Concept Unification occurred, Mr. Munch replaced Fatz Geronimo from ShowBiz Pizza as keyboardist, songwriter, and band leader.

Mr. Munch originally appeared in November of 1978 at the opening of Pizza Time Theatre's second location. The idea for Mr. Munch came from Michael M. Hatcher, director of entertainment for Pizza Time Theatre. MIchael M. Hatcher decided that the cast should have a Cookie Monster-like character, and in order to make room for him, Crusty the Cat was removed. Early concept sketches for Mr. Munch by artist Debbie Barton featured him in different colors. However, by the time his character design was completed, it was decided that he would be purple and yellow, as seen in his first appearance.

Mr. Munch was originally voiced by Scott Wilson, who gave him a scratchy voice. In his first appearance on the Shelf, Mr. Munch (along with Pasqually) was placed behind a set of double doors. When the balcony stage was introduced, Mr. Munch was placed at the far left of the stage, a place he would hold until the creation of Munch's Make Believe Band.

When Pizza Time Theatre and Showbiz Pizza merged into one company, Mr. Munch, along with the rest of the band went through a slight redesign. Mr. Munch was now portrayed as being slightly rounder and his voice, still provided by Scott Wilson, was changed to a deep voice to resemble that of Fatz Geronimo. In the late 1980s when Showbiz Pizza created the Concept Unification Prototype to test phasing The Rock-afire Explosion out of Showbiz, Mr. Munch was supposed to utilize the mechs of the various prop characters of The Rock-afire (Looney Bird, Sun, Moon, Choo Choo, Antioch) to give the appearance of travelling around the stage.

After the prototype was scrapped, Concept Unification began at stores and Fatz was converted to Mr. Munch, making him the leader and pianist of Munch's Make Believe Band. In 1993, Scott Wilson was replaced by Duncan Brannan as the voices of both Chuck E. Cheese and Mr. Munch. While Duncan Brannan would continue to provide the voice for Chuck E. Cheese, Mr. Munch had a variety of voice actors during this time period as Disney produced their own shows. These actors include; Doug Teel, Bob West, and an unknown actor.

During the shows from 1996-1997 which utilized the Awesome Adventure Machine, Mr. Munch went through another slight redesign. He was given a new orange and yellow shirt with green shorts. Duncan Brannan also returned to voicing Mr. Munch.

Munch appeared in the direct to video film Chuck E. Cheese in the Galaxy 5000. He uses his articulated head from the Awesome Adventure Machine shows, and was voiced by Chris Sabat.

In 1998 with the introduction of Studio C, Mr. Munch was no longer manufactured as an animatronic, rather being portrayed as a puppet displayed on a screen, along with the other side characters. He was also given a new voice by John Bowen. He remained mostly the same as his previous incarnations, until 2014. Mr. Munch was redesigned in 2014 to a new "Rockstar" design. Mr. Munch's fur became much shorter, his hair was now a mohawk as opposed to the messier look of earlier incarnations. His pants were switched out for tan pants and his green tennis shoes became orange sandals. Mr. Munch's voice was now provided by Chris Hill who sounds reminiscent of his Pizza Time Theatre voice.

Much like Mr. Munch's appearance, his personality has also remained very consistent. Like Mr. Munch's name suggests, he is very fond of eating, particularly pizza. Often in shows he makes comments about his hunger and love of food, such as suggesting a "pizza break" when the show is over. Many of his songs are also about food. Throughout the restaurant's history, he's also been portrayed as slow and dim-witted, although still very friendly. 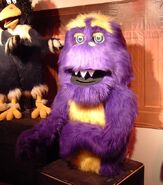 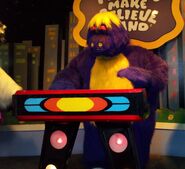