The Road Stage is a type of stage installed at locations that were originally Pizza Time Theatre and Chuck E. Cheese's Pizza locations. It is the first Cyberamic stage that implemented the newly created (at the time) Munch's Make Believe Band setup.

The Road Stage is perhaps the most (currently) uncommon of the previously described stages. A drastic difference is apparent: all of the animatronics, except Chuck E. Cheese, are divided into halves. Half-bodied versions of Helen Henny, Mr. Munch, Jasper T. Jowls, and Pasqually are all propped onto colorful, painted wooden boxes (referred as "buildings" in a 1990 Cyberamic diagnostics tape) with their names displayed on them (with the exception of Munch in almost all installations), so children are more likely to call the characters by their names. Also practical to note is the fact that half bodied characters had been featured before; the Balcony Stage, C-Stage, and the Rocker Stage (to a degree in Munch's and Pasqually's cases) used the upper halves of the characters rather than the full-bodied ones.

The early prototype of the Road Stage had a bigger star behind Chuck E., Mr. Munch had a TV behind him instead of the Munch's Make Believe Band Sign (the buildings that would have the MMBB sign attached were instead used for the Chuck E. Cheese neon sign, which was bolted to them). Pasqually had a backdrop that represented a type of Italian restaurant but in an abstract format, used instead of the common "Amateur Hour" brick wall (previously implemented in the 3-Stage and later used for the 2 and 1-Stages). A flat, wide road was placed in front of the characters' "buildings" as well as two lamppost props on both sides of the stage, hence the name.

It was installed in Springfield, Pennsylvania in the fall of 1990. The finalized version of the Road Stage would be released a short while later, starting with Jonesboro, Georgia in the same year.

Since the introduction of the 2-Stage in March 1992 and 1-Stage in late 1993, the Road Stage has fallen victim to being replaced by these two stage types or Studio Cs throughout the late 1990s and 2000s, due to it being larger in size and being more expensive to maintain compared to later stage models.

As of May 2022, only 11 Road Stages remain in operation in the United States and Canada. 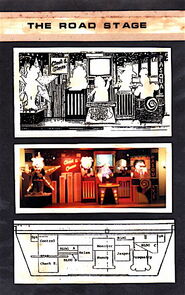 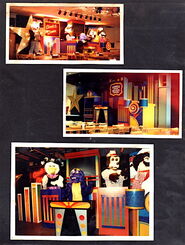 The Road Stage in Placentia, California (2022)

The Road Stage in Norwalk, California (2022)