The Rocker Stage is a stage that originated at former Showbiz Pizza Place and Chuck E. Cheese's Pizza locations.

This stage was first installed in Arlington, Texas (now a 2-Stage) in 1987[1]. This stage is of a house theme. The characters are all in the same order as the Balcony Stage, of which it replaced. The stage originally featured the Singing Flowers in the windows. However, the remaining stages had them removed in 2002 due to them no longer being programmed.

The characters on the stage are full bodied except for Munch and Pasqually. This was the first stage Chuck E. Cheese's had to feature any full bodied characters. This stage was discontinued in November 1990 after the Road Stage was released months earlier.

In the mid 90s, Helen's look was completely changed to look like the MMBB version on the stages that still existed.

The Chuck E. Cheese's in Rockford, Illinois is the last known location to still have the Rocker Stage. Helen is now standing instead of sitting and their cosmetics have been changed to their modern style (i.e. Helen with her updated look as well as Jasper playing his cheese-shaped guitar instead of a banjo).

The restaurant in Simi Valley, California had the second to last Rocker Stage until it closed in 2008.

The location in Cincinnati “Eastgate”, Ohio was the third to last location with a Rocker Stage, and the last PTT Helen in a location. This location got a Studio C Cappa in 2005.

The location in Florence, Kentucky was the fourth to last location to have a Rocker Stage. They updated to a 2-Stage in 2004. 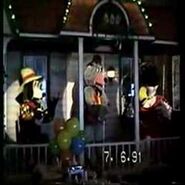 The Simi Valley, California Rocker in 2007

The Rockford, Illinois Rocker in 2007

The Rockford, Illinois Rocker in 2012

Pasqually the Chef at Arlington, TX