The Statue of Liberty was a guest character used in conjunction with The Rock-afire Explosion. The statue's 100th anniversary was in 1986, and ShowBiz wanted to do a tribute, so they installed an animatronic version of the Statue in each of the 170 ShowBiz Pizza locations nationwide.

The animatronic version of the Statue stood 6 feet tall, which matched the size of the other characters. ShowBiz felt it was best to go with a realistic appearance as opposed to a characterized look. The only alteration that was made was the addition of a slight smile, to make the Statue a little less intimidating to children.

The Statue appeared in only one showtape, and had a small speaking role. When she was unveiled by the Rock-afire Explosion, a voice could be heard reading "The New Colossus", the poem inscribed at the base of the Statue in New York City. There were two different Statue of Liberty shows produced (one by ShowBiz and one by Creative Engineering). Though the Statue read The New Colossus in both versions, she was portrayed by a different voice actor in each version.

She was a near-exact scale replica of the structure in New York City. 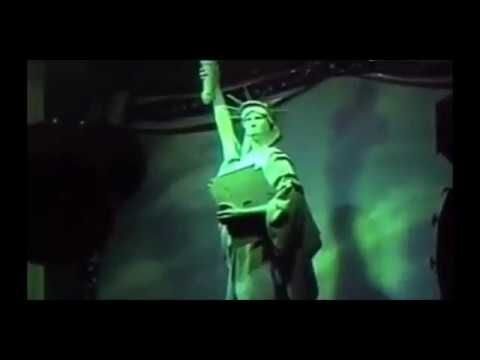