Studio C Alpha (or formally known as just "Studio C" by corporate) is an animatronic stage found at Chuck E. Cheese's. It was installed in restaurants from 1997 to 2001, and was the first stage widely produced to feature a single Chuck E. Cheese animatronic, as opposed to the five-character setup of past stages. Studio C Alpha was themed around a late-night TV studio, and featured a news desk-inspired stage for Chuck E. Cheese, as well as a blue screen stage that kids could use to appear on the many video monitors in the showroom.

After the Awesome Adventure Machine was deemed too delicate and expensive to mass produce, CEC Entertainment came up with the much cheaper "Studio C" concept. It is a one character, one stage animatronic show. At this time in Chuck E. Cheese history, they wanted to phase out the rest of the characters, so the stage featured a Chuck E. animatronic, along with a parrot character simply known as "Bird", for Chuck E. to interact with during shows.

This stage was built by Garner-Holt Productions, an animatronics company that builds figures for many major theme parks, such as Disney and Universal. They were contracted for the project after Creative Presentations, who worked on Chuck E. Cheese and Showbiz animatronics in the late 1980s-1990s, was struggling financially and not able to work on the new show. Chuck E. Cheese Entertainment wanted this new figure to be friendlier looking than previous Chuck bots, to reflect his redesign from a rat to a younger, hipper mouse that occurred in the mid-1990s. To compensate for the loss of the other four animatronics, the new Chuck E. Cheese bot was also much more advanced than previous characters, being capable of 32 different movements.

The Studio C showtapes in 1998 were a huge departure from earlier and later shows. As opposed to the characters singing the songs, various music videos of oldies and pop hits would play on the monitors, and the characters would comment during the videos. These shows were very negatively received.

When Jeremy Blaido took over Department 18 as Director of Entertainment in August 1998, he started making shows with bigger roles for the other characters, so Bird and the late-night studio theme were quickly dropped. The other members of Munch's Make Believe Band would be portrayed as puppets appearing onscreen, whom the robotic Chuck E. Cheese would interact with. Additionally, the shows returned to their pre-1998 format of the characters singing songs, with dialogue and skits in between.

Over the years, Studio C Alpha has seen some downgrades from its original concept. Due to the late-night theme being dropped due to the change in show format, Chuck E.'s red and black tux (the late-night outfit) was eventually replaced by either his blue "Cool Chuck" look, or his purple "Avenger" outfit during the mid-2000s. The blue screen cameras were gradually removed starting in the early 2010s with the Ticket Blaster's debut. The Ticket Blaster's placement in front of the blue screen made it unusable. Around the same time, the interactive console between Chuck E. Cheese's stage and the blue screen was removed and replaced with bright red letters spelling "C.E.C.". The reason for the console's removal was due to its difficulty to repair, as well as it providing a hinderance during Live shows. During the phase-out of CRTs at locations (around 2011), they would end up removing the small CRTs mounted near the ceiling, and replace the larger ones that were installed either inside the wall, or in midair (like at Edina, Minnesota) with flat screens mounted on the wall, and Another thing that was removed over the years was the projector, when the Studio C Alpha stages were first installed, they had a projector aimed at the wall with a wood border on the outside, along with some multicolored fiber-optic lighting. Starting in 2013, all stages eventually ditched the projector for a flat screen TV.

Studio C Alpha was discontinued in 2001 when it was replaced with the cheaper Studio C Beta. However, as of March 2022, 52 Studio C Alphas still exist today, making it one of the most common stages at Chuck E. Cheese.

Studio C Alpha gave the showroom a movie-studio style look with TVs, cameras, and lights. The stage itself had a "late night show" look, with a cityscape background behind the Chuck E. Cheese animatronic. There were colored lights scattered about the ceiling in the showroom. There is a big "Applause" sign and a big "On The Air" sign. The "live" video camera shoots people standing in front of the blue screen, and displays them on the overhead TVs. In a few locations, a karaoke option was tested to go along with the blue screen area called Chuck E.'s Star Search, but the concept failed in 2001.

The showtapes for Studio C originally ran with laserdiscs. In 1999, these were upgraded to a DVD system. Each DVD contains the main show footage, puppets, live and birthday shows, diagnostics, blue screen interactive intermissions (2000-2002), karaoke (1999-2001), and on hold music (usually songs from different showtapes, such as Variety Show). To run a new show, the location is sent a software upgrade floppy disk along with the DVD, which includes the programming.

In the early 2010s, various upgrades have been made to Studio C Alpha such as replacing the interactive console with a CEC panel and flashing lights, as well as upgrading showtapes from DVD and floppy disks to a single flash drive containing all show elements. In mid-2013, many Chuck E. Cheese locations removed the cameras from the blue screen for all types of Studio C setups. Many Studio C locations now have the Ticket Blaster standing in front of the blue screen.

Due to the high number of Studio C Alphas, there were bound to be variations on the stage. 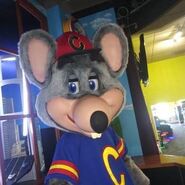 The Studio C Alpha in Kendale Lakes, Fl in 2013 when it had the Cool Chuck shirt and khaki shorts (Now 2.0)