The King was a 9-foot-tall animatronic lion who was a parody of Elvis Presley that was at Chuck E. Cheese's Pizza Time Theatre. The King wore a white jumpsuit with silver lining and held a red guitar. The character was programmed to sing Elvis Presley songs, most of which were the original recordings. He often made dedications of songs to members of the Pizza Time Players in the main dining area. The outro of each skit would tell the audience to "visit the main dining area", "take a walk through the Fantasy Forest", or "enjoy some pizza". Even after the end of Pizza Time Theatre, some restaurants had the King until 1995, where he would sing original CEC songs.

The King later made a cameo in the music video for “Every Boy Every Girl 2017”, and again in 2018 in the animated short “Halloween at the Pizza Time Theatre”, alongside Dolli Dimples and Madame Oink.

The King - A Little Less Conversation

The King at Jungle Jim's 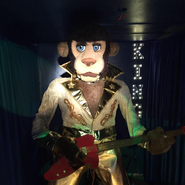 The King at Smitty's Super Service

The King standing next to The Beagles and King Kat at the Volo Auto Museum in Chicago, Illinois