The Warblettes are Pizza Time Theatre background vocal characters. They were three singing crows named Daisy, Maisy, and Irma who would rock side to side. They would often announce and sing backup for the show.

The Warblettes first debuted in the very first Pizza Time Theatre in San Jose, California. They were placed on a red stage on top of the dining area, wore jewelry, and could only move their beaks.

In 1978, they were replaced by The Mopsey Sisters, who were three singing mops, but they were brought back the following year after being redesigned. Now, the Warblettes were closer to each other, had different shaped beaks, bigger eyes, and could rock from side to side.

In 1980, they became part of the Balcony Stage. During this time, they were also redesigned in 1983 to have white fur, bright dresses and rainbow hair, giving them a more colorful appearance. However, this second variation is rare, with only a few known to exist.

When the Rocker and C-Stage were created during the late 1980s, they were permanently replaced by the Singing Flowers.

Today, they can be found at Jungle Jim's as the "Jungle Pets"; however, they are no longer in working condition. The colorful Warblettes can still be seen at Smitty's Super Service Station, and they are in good condition. The colorful Warblettes are also on display at the American Treasure Tour museum in Oaks, Pennsylvania. Both Warblettes can be found on display at Marvins Marvelous Mechanical Museum.

The founder of Chuck E. Cheese originally had a dream to work with Disney, but it didn't work out, so it is possible that the Warblettes are based off of the singing crows in the original Dumbo film. 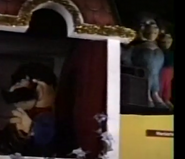